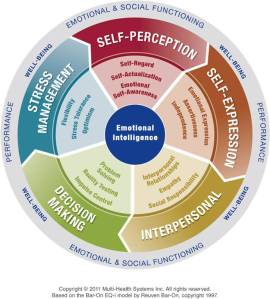 Self-Regard is respecting oneself while understanding and accepting one’s strengths and weaknesses. Self-Regard is often associated with feelings of inner strength and self-confidence.

Self-Actualization is the willingness to persistently try to improve oneself and engage in the pursuit of personally relevant and meaningful objectives that lead to a rich and enjoyable life.

Independence is the ability to be self-directed and free from emotional dependency on others. Decision-making, planning, and daily tasks are completed autonomously.

Interpersonal Relationships refers to the skill of developing and maintaining mutually satisfying relationships that are characterized by trust and compassion.

Empathy is recognizing, understanding, and appreciating how other people feel. Empathy involves being able to articulate your understanding of another’s perspective and behaving in a way that respects others’ feelings.

Problem Solving is the ability to find solutions to problems in situations where emotions are involved. Problem solving includes the ability to understand how emotions impact decision making.

Reality Testing is the capacity to remain objective by seeing things as they really are. This capacity involves recognizing when emotions or personal bias can cause one to be less objective.

Impulse Control is the ability to resist or delay an impulse, drive or temptation to act and involves avoiding rash behaviors and decision making

Flexibility is adapting emotions, thoughts and behaviors to unfamiliar, unpredictable, and dynamic circumstances or ideas.

Stress Tolerance involves coping with stressful or difficult situations and believing that one can manage or influence situations in a positive manner.

Optimism is an indicator of one’s positive attitude and outlook on life. It involves remaining hopeful and resilient, despite occasional setbacks.

This site uses Akismet to reduce spam. Learn how your comment data is processed.